Get A Free Estimate

We recently updated the interior of our pool. Here’s the NEW LOOK with PEBBLE TEC—Laguna Blue. I didn’t realize that when they call it PEBBLE TEC, it would actually look like pebbles when the sun is shining on it! Who would have thought???

We used NELSON POOL COMPANY to do the job and Nelson arranged everything. They first had to remove the old finish and then prepare it for the PebbleTec people to come in a few days later. Nelson started on Wednesday by first draining the pool. Then the hard work began. His crew had to chisel off the old surface of the pool and they started about 1 foot below the old tile. They also chiseled off the surface on the steps and spa. Then they acid-washed the pool. We were surprised they worked such long hours. They began around 7:30 in the morning and they worked till after 8 PM. On Thursday they applied BondTite to the surface and started a pump to pull all the water that was under the pool. The pump had to run continuously so the water pressure wouldn’t build up and cause the empty pool to pop up out of the ground!

It was amazing to watch how involved this process was. I had no idea there would be water under a pool or that an empty pool could be a nightmare for a homeowner. Friday a crew from Pool One arrived to apply the PebbleTec. There must have been 8-9 guys working non-stop to do that. In our original pool, 60% of the surface was concrete and concrete is susceptible to pool chemicals. The original pool color was white but when our pool was drained, it was green due to copper staining and chemical attack. With the new PebbleTec finish, less than 20% of the concrete will be exposed because it’s made up of 80% pebbles. The pebbles are supposed to be less subject to attack by chemicals. Saturday morning the finisher came in and worked another 2 hours and it was his job to bring out the sparkle and do the final clean-up and touch-up. He started the water about 10 AM and said it would take 24 hours to fill and he told us not to turn the water off until the pool was filled. Once the pool was filled, we had a blue pool to match the LAGUNA BLUE color we had chosen. What most astonished me though was the appearance of pebbles on the surface reflection of the water!! PRETTY NEAT!! 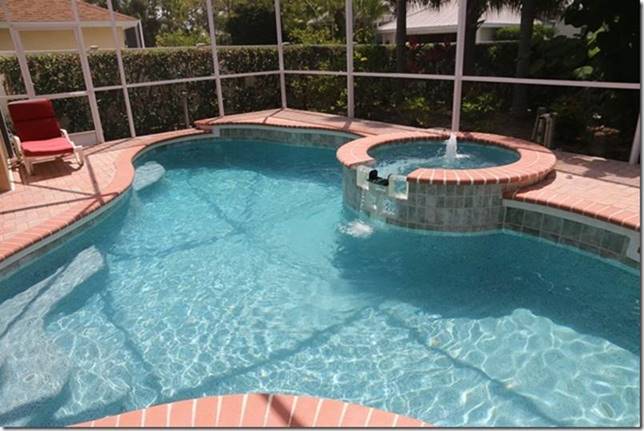 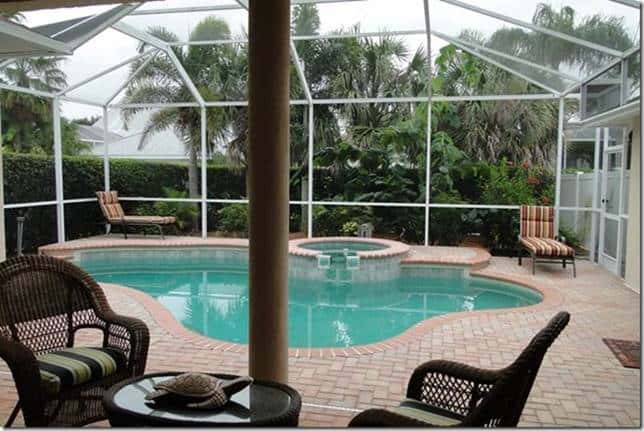